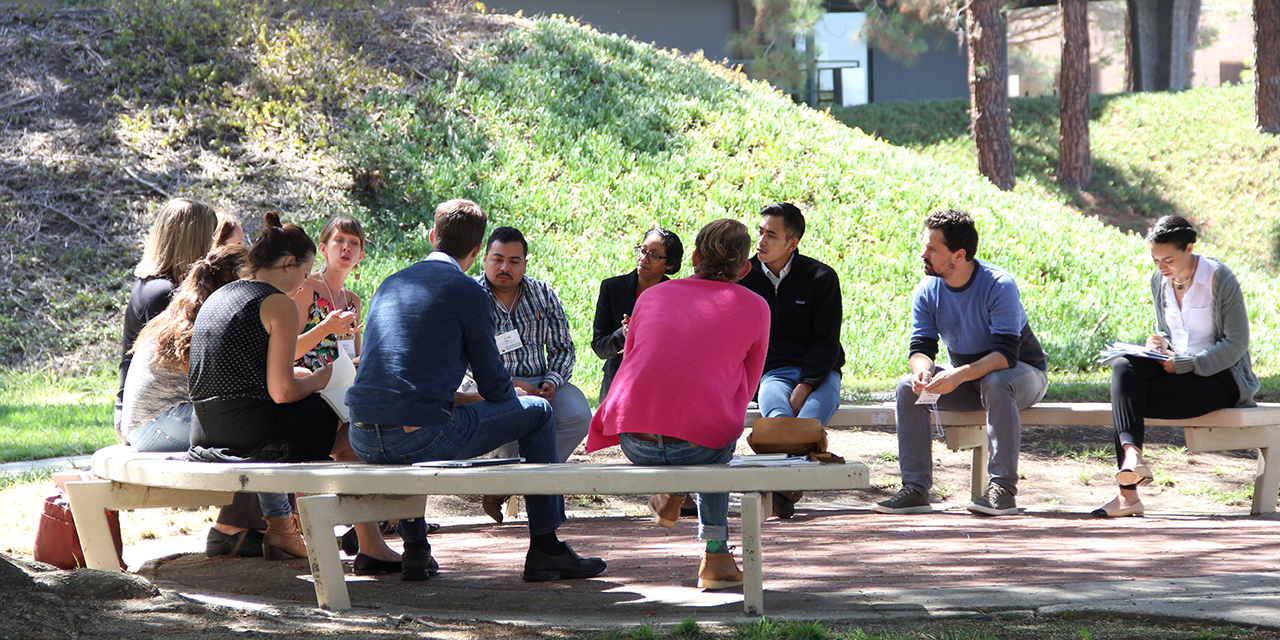 In September 2016, the University of California Humanities Research Institute (UCHRI) hosted the Connected Academics Summer Institute, convening over thirty-five faculty members, graduate students, university staff members, and PhDs at work in the world UCHRI for a two-day event focused on preparing doctoral students in language and literature for a variety of careers. The institute featured updates on individual projects at the three MLA partner institutions (Arizona State University, Georgetown University, and UCHRI), and participants worked on a collaborative project creating a toolkit for faculty members and departments across the nation to help graduate students who want to pursue a wide diversity of career trajectories. In the following conversation, Kelly Brown, assistant director at UCHRI, and Stacy Hartman, coordinator of Connected Academics at MLA, offer their reflections on the institute and on their experiences programming and organizing the event.

Stacy: The idea behind the summer institutes is to have an annual summit meeting of sorts, where we bring everyone involved in Connected Academics together with experts from outside the initiative. We expected that it would be useful to be able to pull in people with expertise in different aspects of the project. At this year’s meeting, for example, UCHRI invited people who specialize in tracking PhD employment outcomes. Many people talk about the importance of tracking, but it’s hard to know how to get started or what the best practices are. That panel really delved into the nitty-gritty details of what it means to run a tracking project, and I thought that was useful to a lot of people in the room.

The conversation about humanities careers for PhDs has progressed rapidly in the last few years, but (as is often the case in academia) everything is decentralized. The institute was an opportunity for people to come together and say, “This what we’ve done; this is what we need.” And to that end, it was also a chance for us to make progress on one of MLA’s deliverables for Connected Academics: the faculty and departmental toolkit. We don’t want to assume that we know what people need from us on this. It’s important for us to consult people who are going to use the toolkit—faculty members, staff members, and graduate students—at every stage. We had a great conversation about the elements of the toolkit.

Kelly: I was most excited to foster a conversation among faculty members, staff members, graduate students, and alumni—groups that aren’t often in the room together—and to bring the University of California into conversation with institutions across the United States. I know that with the most recent funding from NEH there will be similar kinds of conversations happening across the country. What marks the summer institute as unique and interesting is that it talks across campuses and different kinds of commitment to the project. We had public and private universities from the East, West, and Southwestern United States at the table and made sure to engage graduate students, faculty members, and staff members.

Stacy: Yes, the diversity of the institute was unique in my experience. As you say, one of the problems is that while this conversation is happening in more places all the time, it doesn’t often take place in “mixed company,” so to speak. Faculty members have it with one another, and students have it with other students. But now it’s important for the conversation to start happening across different groups of people.

Kelly: One of the struggles that we experienced in this gathering was trying to meld more theoretical or conceptual kinds of work—conversations about the structure of graduate education, for example—with hands-on, almost DIY work. You and I wanted something tangible to come out of the institute, which meant prioritizing sessions that allowed people to design and build something concrete together. And yet we also tried to make room for more general conversations about labor and other issues that participants raised. How do you think it went?

Stacy: I think it was a productive tension in the end! Would you agree?

Kelly: Definitely! For me, a moment we had at the beginning of day two underscored this tension. Even though we’d spent time discussing the parameters of the toolkit on the previous day, several faculty members in the room wanted to hash it out a bit more, while others were clearly ready to move on from discussing the toolkit as a concept to actually working on it in small groups. I remember feeling like a deer in the headlights. Do we take even more time to talk about the process, exploring additional possibilities? Or do we dive in and start creating some tools? You took charge and suggested we give ourselves the chance to actually see what we could create in our small groups. We could then reconvene and continue the conversation with some tangible products to show for our time together. It was so smart! But this incident also speaks to some particular dynamics in terms of working styles, interests, and perhaps even privilege.

Stacy: I think it’s hard because the problem is so big and there are so many ways to approach it—and a lot of different priorities. I think one thing we did that worked out really well—which you insisted on and which I was initially skeptical about—was break the group into the different constituencies: faculty, staff, and student. That gave each constituency the space to set their own priorities before discussing them with the other groups.

Kelly: I think the issue of space, both real and metaphorical, is an important one. Admittedly, I’m sensitive to how people fill the room differently. And I did notice that it was probably easier for some people, say, faculty members or seasoned administrators, to claim speaking space. I think we worked hard to try and equalize, as much as possible, contributions from all participants. But I did hear from some of the graduate students that the smaller working groups didn’t always fully allow for integrated engagement. I share this not as a critique of individual participants, because everyone we invited came in the spirit of collaboration, but to acknowledge it so that others who convene similar gatherings can plan for these kinds of challenges. That said, it seemed as though we left feeling invigorated about the work to come. And that feels like a huge success to me.

Stacy: Definitely. And just to be clear, there is still a lot of work left to do! Designing something like a toolkit takes a long time. After two days we ended up with a lot of ideas and some products that need polishing. We definitely didn’t come up with a finished toolkit, which didn’t surprise either of us, I think. But we’re working on that now. And the institute gave MLA staff a much better idea of what faculty members, staff members, and students were thinking about and how we might best serve them.

Kelly: Well, we’re looking forward to Arizona State University’s summer institute next year! And for those who want to read about the summer institute from a graduate student’s perspective or a faculty member’s, please check out our other posts.