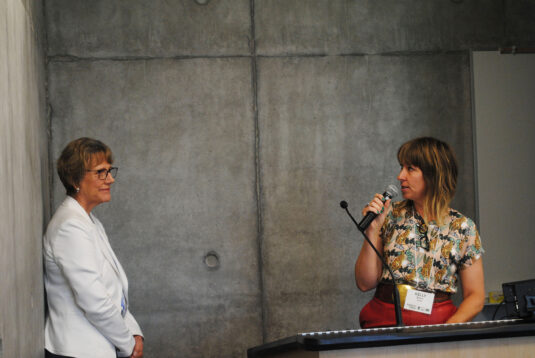 On April 22, 2019, the University of California system convened at UCHRI at UC Irvine in order to hold a daylong colloquium to explore the most recent data from the Humanities PhD alumni surveys and data collected from the UC Humanists@Work Focus groups. Humanities and Graduate deans, Humanities Center leadership, faculty, staff, graduate students, and University of California staff attended alongside national leaders in graduate education. Carol Genetti presented on the history of the project, and on UC and national models of graduate education and professionalization. 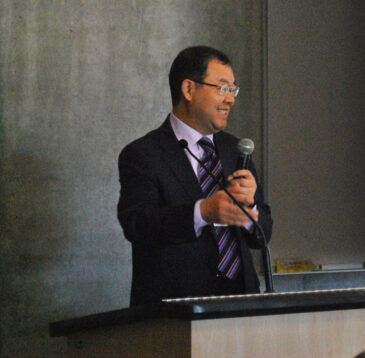 Institutional Research and Academic Planning (IRAP) at the University of California Office of the President administered the PhD Career Pathways Survey to PhD alumni who received a doctoral degree in 2001, 2002, 2008, 2009, 2013, and 2014. The survey included questions about alumni’s doctoral experience while at UC and employment outcomes after graduation. More than 5,000 alumni responded to the survey administered in 2017 and 2018, with an overall response rate of 40 percent, representing about 26 percent of all UC PhD alumni in these six graduating classes. IRAP created a dashboard in the UC Information Center that provides responses by campus, exit year, and broad discipline. 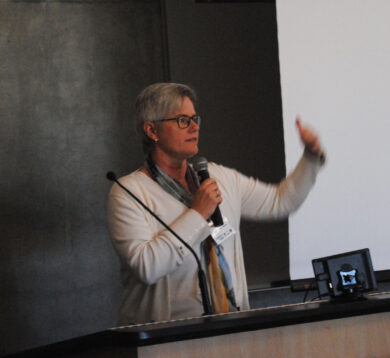 This presentation provided an overview of two survey administrations and response rates and representativeness, along with major results of Humanities alumni’s employment and their doctoral experience at UC. The presentation will also offer a demonstration of the dashboard to support discussions on graduate education and professionalization in the humanities. The dashboard is available at the UC’s Information Center website (https://www.universityofcalifornia.edu/infocenter/employment-and-doctoral-experience-phd-recipients). 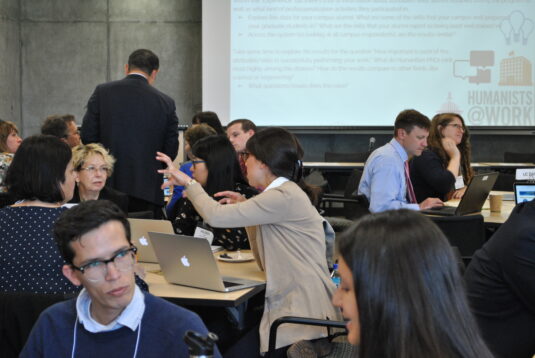 Nine University of California campuses were in attendance at the event, and spent the morning session exploring campus-specific data with colleagues from their own campus. This session was followed by a systemwide analysis and discussion of the data, with attention to differences in the results across campuses, disciplines, and year graduated. 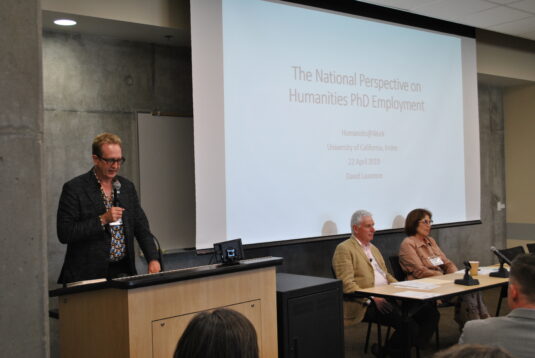 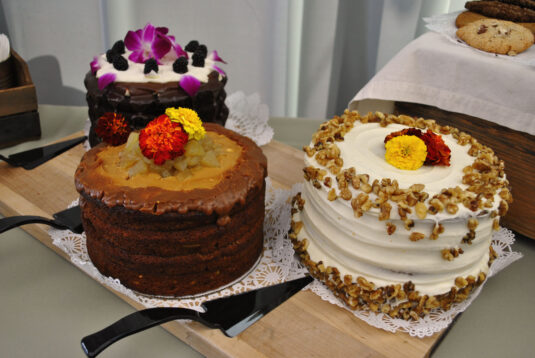 During the lunch hour, Humanists@Work presented a slideshow of focus group responses that concerned the following issues:

What We Heard in the Alumni Focus Groups

Humanists@Work is conducting six focus groups with UC PhDs at work in the world across California in order to learn about the qualitative aspects of PhD alumni experiences. In this session Jacob and Kelly presented on what Humwork has heard so far, with attention to reasons for leaving the academy, the future of work, graduate school expectations, and ideas for alumni engagement. 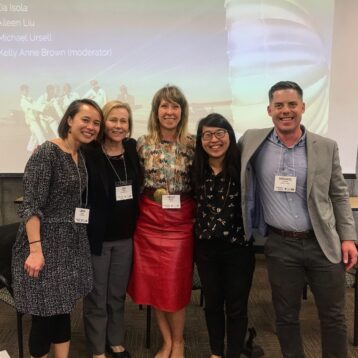 Stories from the Field

Kelly Anne Brown, associate director at UCHRI, manages a diverse portfolio of projects, including the UC-wide competitive grants program, Humanists@Work, and Horizons of the Humanities, among others. She holds a BA in English from Lewis & Clark College and a PhD in literature from UC Santa Cruz, where her scholarship centered on modernist publicness and interwar art and performance. Her professional background includes experience in public policy and administration, with a focus on children and family issues at the city, county, and state levels of California government. Her recent scholarship addresses issues of professionalization, the work of the humanities, and the future of graduate education.

Pamela Brown is Vice President of Institutional Research and Academic Planning (IRAP) at the UC Office of the President. She began in November 2013 and manages a team that produces evidence-based analyses and reports for university and academic senate leaders to advance strategic and academic planning, address legislative requests, support assessment, and promote transparency efforts.

IRAP is responsible for the production of UC Annual Accountability Report (https://accountability.universityofcalifornia.edu/2018/), UC Information Center (https://www.universityofcalifornia.edu/infocenter), and UC in California maps (http://arcgis.cisr.ucsc.edu/ucop/) that illustrate the impact of the University of California through data-driven narratives and visualizations. The team administers numerous systemwide surveys, including UC Undergraduate Experience Survey (UCUES), undergraduate and graduate cost of attendance, and graduate student well-being, and the IRAP website (http://www.ucop.edu/institutional-research- academic-planning/index.html) includes additional topic briefs and reports on university academic and administrative operations.

Prior to joining UCOP, Pamela worked sixteen years at UC Berkeley where her last role was Executive Director of the Office of Planning and Analysis (OPA). Pamela received her Master’s degree from the Graduate School of Public Policy and her Bachelor of Arts degree in Applied Mathematics both from UC Berkeley.

Tongshan Chang is Director of Institutional Research and Academic Planning at the University of California (UC) Office of the President and Consultant of UC Systemwide Academic Senate Committees on Admissions and Relations with Schools (BOARS) and Preparatory Education (UCOPE). He mainly works on student data analyses and survey research projects, and provide analytical support for decision making at UCOP. Tongshan also serves on the AIR (Association for Institutional Research) Data Policy Advisory Group, which advises the AIR Executive Office and its partners on topics related to state and federal higher education data policy.

Carol Genetti is Professor of Linguistics and Anne and Michael Towbes Graduate Dean at UC Santa Barbara, and an active member of the Council of Graduate Schools, AAU’s Association of Graduate Schools, and the Western Association of Graduate Schools. In her role of Graduate Dean, Genetti has significantly strengthened campus-wide resources for graduate student professional development and has begun providing programs with data on career outcomes. In her quarter century in the Linguistics Department, she has seen doctoral students find successful careers in a variety of non-academic venues, as well as in tenure-track and adjunct positions at community colleges, comprehensive universities, liberal arts, and R1 schools.

David Theo Goldberg, PhD, is the director of UCHRI and the executive director of the Digital Media & Learning Research Hub. He holds faculty appointments as professor of comparative literature, anthropology, and criminology, law and society at UC Irvine.

Zia Isola is the director of the UC Santa Cruz Genomics Institute Office of Diversity in the Baskin School of Engineering at UC Santa Cruz. In this role she provides research training opportunities and professional coaching to first-generation college students, women, and students of color who are pursuing STEM degrees. In addition to working with students, she collaborates with campus leaders to help ensure that the culture of UC Santa Cruz is inclusive and welcoming. She is a member of the Chancellor’s Campus Inclusive Climate Council and the staff advisor to the UCSC Women in Science & Engineering. Prior to coming to UCSC in 2008, she was lecturer in the Dept. of English and the NSF-AGEP diversity coordinator for the Division of Physical and Biological Sciences at UC Santa Barbara.

A first-gen student, she began her educational journey at Sierra Community College, then transferred to UC Berkley where she received a BA in English. She received a MA from Syracuse University and a PhD in English and Cultural Studies at UC Santa Barbara in 2004.

Over a thirty-year career at the Modern Language Association, David Laurence served first as assistant director and then director of the MLA’s Office of English Programs, director of the Association of Departments of English (the MLA’s organization for department chairs and other departmental leaders and administrators), and director of the MLA Office of Research. He was responsible for data collection and analysis for the MLA’s periodic surveys of PhD placement and departmental staffing and for developing annual reports on the MLA Job Information List, on the federal government’s annual Survey of Earned Doctorates, and on trends in bachelor’s degree completions in the humanities and the changing character of the academic workforce. He holds an AB from Amherst College and a PhD from Yale University, both in American Studies. Prior to joining the MLA staff in 1996, he held a faculty position in the English department at Stony Brook University. Immediately after completing his PhD, he worked as a researcher and script treatment writer for WESTERING, a project led by Yale historian Howard Lamar to produce a series of documentary films on the history of the American west. He retired from the MLA in July 2018.

Aileen Liu is the Academic Policy Coordinator at UCLA’s Graduate Division. In this role, she researches, develops, and analyzes academic policies to support UCLA graduate students, postdoctoral scholars, and visiting researchers. She earned her BA in English from Duke and her PhD in English with a Designated Emphasis in Renaissance and Early Modern Studies from UC Berkeley, where she wrote about and taught English Renaissance literature, Shakespeare, film, and contemporary fiction and non-fiction. While at Berkeley, she found several outlets for her passion for educational equity, diversity, and inclusion: as a graduate student representative to her department’s Graduate Program Committee; as a member of UCHRI’s Diversity Working Group; as a mentor to English undergrads through Berkeley Connect; and as a part-time employee for Teach For America, supporting their pre-service teacher training sites across the country. Before beginning her current role at UCLA, she was Visiting Assistant Professor of English at Trinity College in Hartford.

Linda Louie joined the Graduate Division at UC Berkeley in 2017. As Professional Development Resource Coordinator, she oversees GradPro, a new professional development outreach program serving Berkeley’s entire graduate student population. She leads a team of ten graduate student Professional Development Liaisons, who help departments enhance their local professional and career development offerings, and connect students with resources beyond departments. She holds a Ph.D. in Romance Languages and Literatures from UC Berkeley (2017). During her graduate program, she benefitted greatly from initiatives like Humanists@Work.

Tyrus Miller is Dean of the School of Humanities at the University of California, Irvine. He brings to the position more than twenty years as an interdisciplinary scholar in the humanities; extensive administrative experience in a variety of roles from undergraduate liberal education to graduate education to institutional management; and a rich engagement with humanities research as a scholar and strategic university leader. Prior to his coming to UCI, he served as Vice Provost and Dean of Graduate Studies and as Co-Provost of Cowell College at UC Santa Cruz, and as the Director of the UC Education Abroad Program’s Study Center in Budapest, Hungary. He earned his Ph.D. in English from Stanford University, an M.A. in Creative Writing from Johns Hopkins University, and a concurrent B.A./M.A. in Humanities from Johns Hopkins. He is an internationally recognized scholar of 20th-century art, literature, and culture, with a specialization in the innovative modernist and avant-garde literary and artistic movements of Europe and the United States. In addition, he has written extensively on the art and culture of socialist and post-socialist East-Central Europe. His publications encompass diverse but interconnected interests in literature, cultural and social theory, philosophy, film studies, and visual and performing arts.  He is author of Late Modernism: Politics, Fiction, and the Arts Between the World Wars; Singular Examples: Artistic Politics and the Neo-Avant-Garde; Time Images: Alternative Temporalities in 20th-Century Theory, History, and Art; and Modernism and the Frankfurt School. He has edited Given World and Time: Temporalities in Context and A Cambridge Companion to Wyndham Lewis. He is also the translator from Hungarian and editor of György Lukács, The Culture of People’s Democracy: Hungarian Essays on Literature, Art, and Democratic Transition and series co-editor of Brill Publisher’s Lukács Library series.

Michael Ursell is the manager of development and strategic partnerships at the Black Mountain Institute at the University of Nevada, Las Vegas. He is also associate publisher of The Believer, a nationally circulated literary magazine. Previously, he worked at the Los Angeles Review of Books as a communications director and an editor for the nonprofit magazine’s poetry section. He arrived at LARB through the American Council of Learned Societies “Public Fellows” program. Michael holds a PhD in literature from the University of California, Santa Cruz, where he wrote about English and French Renaissance poetry and taught many classes, from Shakespeare to intro composition. His academic writing has appeared in publications including Studies in English Literature 1500-1900, Connotations, and The Princeton Encyclopedia of Poetry and Poetics.